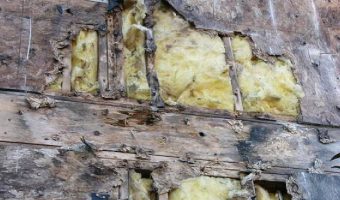 The most misunderstood building science topic is the requirement of a poly vapour barrier on the interior side of framed wall assemblies. Top building experts agree, careful air sealing, not vapour barriers are the key to keeping moisture out of wall cavities. Air movement accounts for more than 98% of all water vapor movement in building cavities.

Dr. John Straube, the renown Canadian Building Scientist states: “The whole reason we’re talking about vapor barriers is not because vapor diffusion control is so important, but because people believe it is so important.”  ** (Diffusion is the mechanism by which moisture moves through building materials.)

The laws of physics govern how moist air reacts in various temperature conditions. The temperature and moisture concentration at which water vapor begins to condense is called the “dew point.” Relative humidity (RH) refers to the amount of moisture air can hold at a certain temperature. The ability for air to hold water vapor increases as it warms and decreases as it cools. Once air has reached its dew point, the moisture that air can no longer hold condenses on the first cold surface it encounters. If this surface is within an exterior wall cavity, the result is wet insulation and framing. If the wall is not able to dry effectively – the inevitable result is mildew, mold and rot.

“One of the problems in the building industry is that we have a spreading ‘cult-like’ mentality that worships at the ‘church of polyethylene’. This cult views the answer to all moisture problems as the installation of a polyethylene vapor barrier on the inside of buildings. This cult is responsible for many more building failures than building successes. It’s time the cult deprogramming started.” – Joseph Lstiburek, P.Eng, Ph.D. / Building Science Corporation. 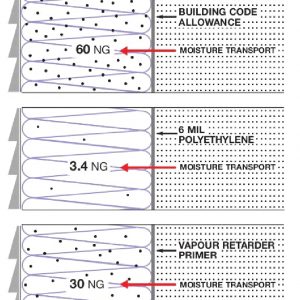 There is a cleaner, better and more cost effective solution! Vapour barrier primers and paint meet code. They easily control vapour diffusion while allowing some drying to the inside. The application is fast and simple. No poly, no black gunk, no tape and no staples. More importantly painting drywall is really easy to do and hard to get wrong. Conversely, the installation of a poly vapour barrier is complex and difficult to get right. 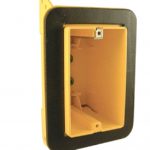 Most primers and paint exceed NBC requirements for water vapour diffusion, with a vapour permeance in the area of about half of that allowed by code.

Not only do vapour retarder primers and paint meet code compliancy, the application of vapour barrier paint is supported by building science. There is no downside with primers and paint, they just need to be better understood.