Energy “is” a big deal, and it’s importance is reflected in the new energy codes for buildings!

The National Energy Code of Canada for Buildings (NECB) was released in November of 2011 and will be implemented  in many jurisdictions across Canada over the next few years. British Columbia has made it law and will be enforcing the new standard as of December 20, 2013; which means every building built in BC from December 20th on, will have to use less energy.  The time frame between introducing the NECB and it’s implementation allows suppliers, contractors, commercial building developers and building officials the necessary time to prepare for the new energy requirements.  NECB 2011 has many changes with huge implications for construction with one change being a requirement for higher insulation r-values in ceilings, walls, floors and, windows and doors.

Another major change, and one that most people don’t understand,  is the move away from nominal insulation r-values and a move to effective r-values.  Continuous insulation, which is insulation uninterrupted by building materials, is another requirement of the new NECB.   These interruptions create a “thermal bridge” in the insulation which have a dramatic affect on how insulation performs in the building envelope.  As shown in the table below the, real r-value, of R-20 insulation installed in a 2×6 wood wall performs at only R-15.8, while in a 2×6 steel stud wall it performs at a mere R -7.1.  Effective r-values are a measure of the thermal performance of a complete wall assembly, not just the insulation.  The importance of this is recognized in the  NECB 2011 and it lists the ASTM-1363 test procedure as an approved test method for measuring wall assembly performance. 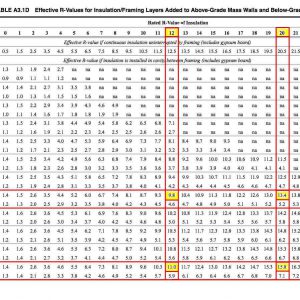 These changes are needed; global warming is real, and the need to reduce our carbon footprint is crucial.  Designing energy efficient buildings that consume less energy is a step in the right direction.